The Story of Mitchell HD 319

(slideshow at bottom of page)

At 5 OTU, Boundary Bay, most of the students were RAF – there to transition onto a tricycle gear styled American aircraft, the B-25 Mitchell, and then to the Liberator bomber for service in the Far East. This crew had been on the OTU for three weeks and during that time F/O Hannah had logged 44.25 hours on type of which 15 hours was solo. He was considered an average pilot with instrument flying rated as fair. He had a total of 1308.50 flying time, mostly as an instructor on Oxfords.
On the 14 July 1944 seven crews including the crew of Flying  Officer Hannah RAFVR were scheduled to fly exercise 108D which was a cross country exercise from base to a sea position, to Port Hardy, to Pat Bay for a bombing run, and then to base. First and second legs were to be flown at 8,000 feet and third one to be flown at 15,000 foot. Duration of the flight was forecast to be 4.30 hours.
The briefing started at 0930 hours with the weather forecast over the Northern part of Vancouver Island  consisting of broken alto-cumulus clouds with broken or overcast cumulus and heavy cumulus based 4000 to 5000 ft. and topped at 13,000 to 14000 ft. with occasionally topped up to 16000 ft. and for the return to base party cloudy conditions. Winds 250° at 25 kts.

The aircraft they were assigned was Mitchell HD 319. This aircraft was taken on strength by Western Air Command as a new aircraft. Ex USAAF B-25D-35-NA serial number 43-3787, ex RAF Mitchell Mk. II HD319 on 21 February 1944 where it was delivered to stored reserve.  It was issued on 9 March 1944 to No. 5 Operational Training Unit at Boundary Bay, BC. It had been in service for four months by this time.
HD 319 took off at 1046 and reported positions at 1156 and 1310. At 1312 they gave an ETA for Port Hardy as 1335. Nothing was heard from the aircraft after that. It was declared missing at 2000 and a search was started.  From the 14th to the 25 th July a total of 238.18 hours was spent on the search of which 13.15 were night hours. Nothing was found of the aircraft except some wreckage of a Mitchell aileron washed ashore in Washington about 60 miles south of Quillayute four months later. It could not be positively tied to HD 319.
Sixteen years later, on 20 Sep 1960 the RCMP at Port Hardy, B.C. relayed a report from a Mr. Bratland who reported finding wreckage of an aircraft near the north end of Johnson Lagoon on Vancouver Island (approx. position 50-12N, 127-38W). An air search was carried out by 121 Composite Unit, RCAF Station Sea Island, on 28 Sep 60 with negative results.  It was decided that because of the very heavy timber growth further investigations would have to be carried out by ground party Weather conditions were not suitable for a ground search party and it was decide to delay further investigation until the next spring.

During the period 25 to 28 Apr 6l a ground party proceeded to the area and found wreckage which was identified as a Mitchell.  However, no number to identify the aircraft or any sign of human remains could be located.  During this search the nose section and the mid-wing section were found.  Search activity was hampered by almost jungle-like growth which limited visibility to a few feet.
The following were obtained from instruments panel:

Since only a small percentage of the total aircraft had been located and positive identification had not been made it was decided that further investigation was warranted.  From 13 to 18 Sep 6l a RCAF ground party accompanied by a”‘Dept of Transport accident investigation team again visited the site.  Several other pieces of aircraft were found including part of the tail section bearing the identification “HD 319”.  The wreckage was scattered over an area of about 3/4 of a mile.  However no sign of the crew was found. The following observations were made by the ground party. In the nose section three seat belts, intact but unbuckled, and a stowed parachute, were found.  In the main cabin section two Mae Wests and a bandolier were found.  All hatches were secured in the closed position, except the belly hatch amidship, which was torn loose and missing.  No signs of fire were noted.

Following is a resume of pertinent details with regard to all major components located:

a)    A stowed parachute was found at nose section – type QCQR
b)    All seat belts located were open
c)    Escape hatches nose section and main fuselage were closed
d)    No evidence of human remains, clothing, or personal effects, though canvas and leather portions on aircraft interior were in recognizable condition
e)    Two mae wests and a bandolier were found at main fuselage section
f)    No evidence of explosion or fire
g)    Identification letters HD-319 found on fuselage and tail sections

On the ground, no main impact point could be found, and the major portions of wreckage appeared to have come to rest with little forward momentum.  The nose section (pilot’s compartment) was inverted so it was hoisted by block and tackle to a vertical position for easy access and scrutiny. These factors indicate that the aircraft may have broken up in the air or possibly have struck a higher peak, in the area, disintegrated, and travelled some distance to its present position.
The investigations give no indication of the cause of the crash or any detail as to the fate of the crew.  Since there is absolutely no trace of human remains or clothing in the area, and since it is unlikely that crew members could survive a crash of this nature, it is considered likely that the crew were thrown from or abandoned the aircraft before the crash.  In this wild and inaccessible part of northern Vancouver Island, covered with thick, impenatrable undergrowth and subject to a heavy annual rainfall it is most unlikely that any trace of the crew will ever be found.

A visit by a group of private individuals at a later date located one of engines about ½ a mile from the main center section. It was clear by the bends to the blades that the engine was under power and rotating at the time of the crash. They also located the parachutes, first aid kits, life raft etc. One could also see the body imprint in the pilot’s seat left by F/O Hannah. None of the aircraft has been salvaged, the only thing they removed were the 2 upper 50 Cal Browning’s which were donated to the Canadian Museum of Flight.
It is possible that the pilot had snuck under the cloud which was topped at 8,000’ and seeing it was just after noon the CU were probably based at 2.500 and there was some cloud on the water. They probably made landfall on Brooks and followed it up to Johnson Lagoon then seeing they were running into the mountains they followed the creek valley up and got boxed in and turned right to go back to the Lagoon.

From the location of the aircraft parts they were likely heading approximately 150T at a reasonable flying speed when the right wing hit something and the engine nacelle and possibly one tail fin fell off. The aircraft continued to disintegrate as it went down the valley and then up the hill until only the forward area was left when the nose dug in and the piece rotated, the wing root area broke off and landed 60 paces in front of the nose which was inverted by that time. The crew were likely thrown out of the aircraft and are somewhere between the nose and the wing root (center section) area.  Because the parachutes were discovered at a later date it was likely that the crew were in the aircraft during the crash. They would have had parachute harnesses on so maybe a metal detector would pick up the buckles etc.

On 23 June 2012 several members of the 4th Canadian Ranger Patrol Group conducted a service and attached a stainless steel plaque to Mitchell 319 commemorating the sacrifice of the four young RAF aircrew that perished when the aircraft crashed into a hill above Johnson Lagoon on Brooks Peninsula. Padre Captain Ernie Roberts officiated and RSM Toni Fozzard MC’d while various members of the Patrol performed duties speaking, standing guard, singing and taking pictures. Judging from eyewitness and photograph accounts the service exceeded the high expectations that 101 Squadron had for this exercise.

The Zeballos and Port Hardy Rangers helped 101 Squadron commemorate Mitchell HD 319. The Rangers did a fantastic job under difficult conditions, including travel by boat on the open west coast, followed by a fast paced hike – carrying the stainless steel plaque and the tools and paraphenalia to attach it to the wreckage – and performed the memorial service in the remote jungle. The steep terrain was as challenging as one could expect on the rugged westcoast and there was additional time pressure to reach the scattered wreckage and return before the falling tide trapped the party for the night. The Rangers were mindful of the solemnity of their duty to honour those who fell and gave them a warrior’s farewell. 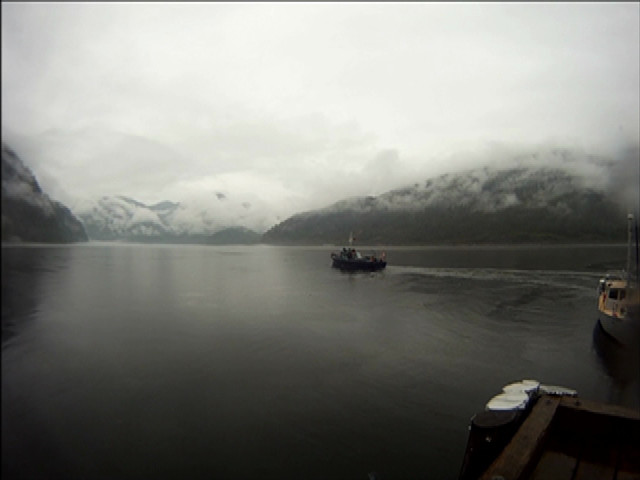 The weather over Brooks Peninsula 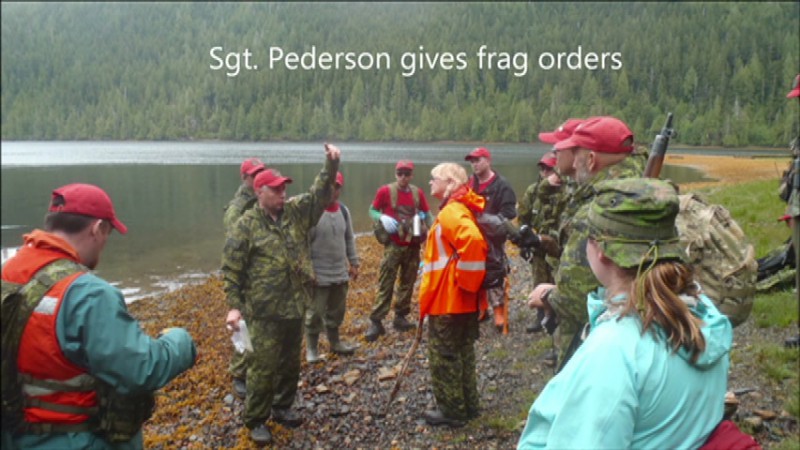 Before the grueling hike 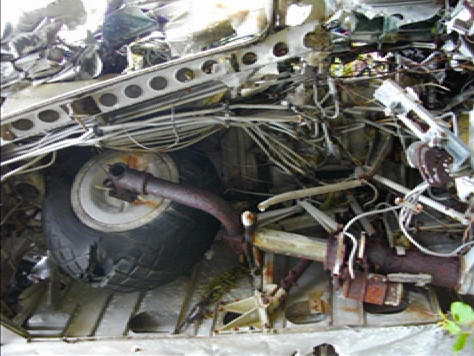 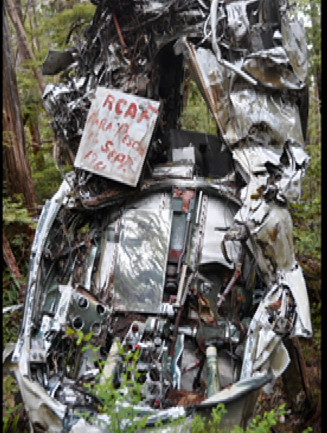 Plaque mounted in remains of cockpit 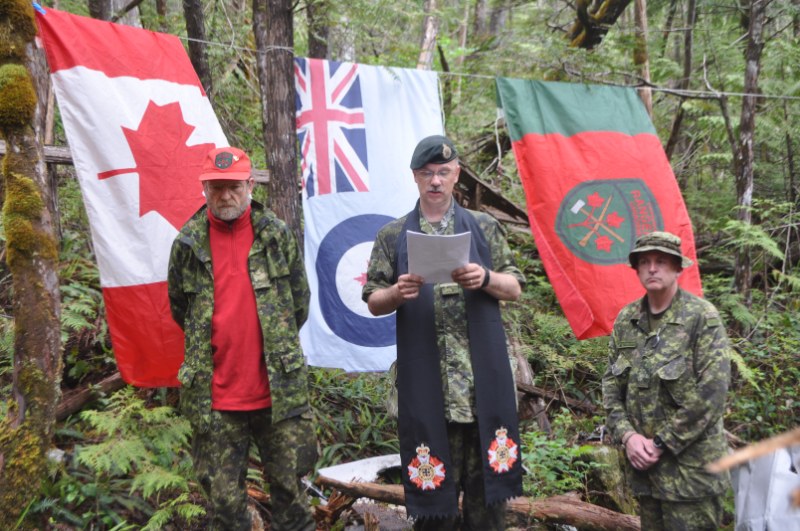 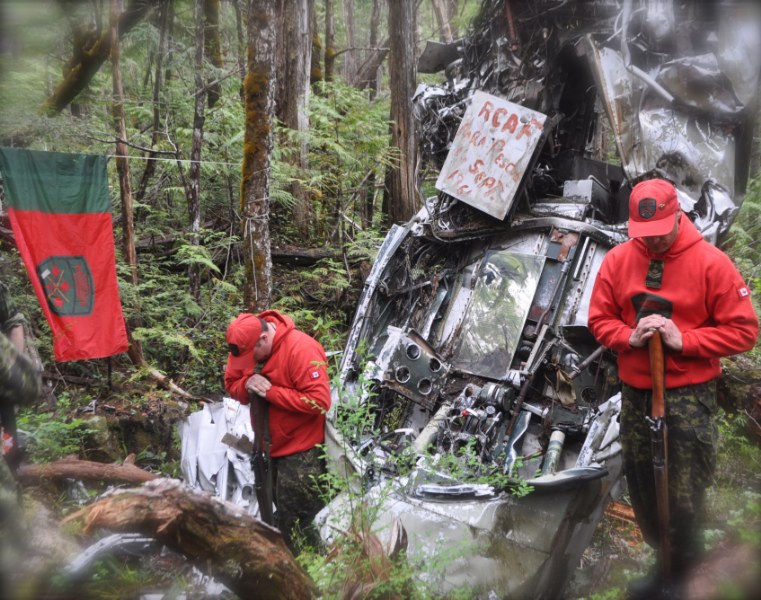