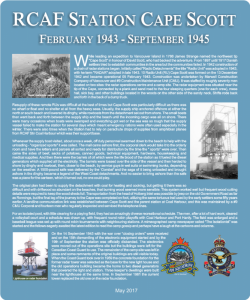 The extreme northwestern tip of Vancouver Island, is a 150-metre-high promontory linked to the island by a low sandy neck, roughly 200 metres wide. In 1786, James Strange while leading a fur trading expedition to the western shore of Vancouver Island, named this northwest tip Cape Scott in honor of David Scott, a Bombay merchant who had backed the adventure. From 1897 until 1917, Danish settlers tried to establish communities in the area but due to the harsh climate and lack of governmental support, the communities failed and most settlers left the area.  Alfred Spencer, the last resident, left in 1956. 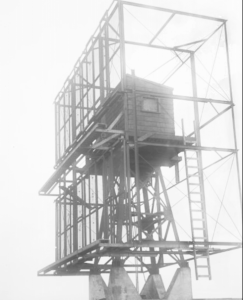 In 1942 construction of a chain of radar stations for surveillance of the Can-US Pacific Coast began. Initially the stations were called “Radio Detachments” and in 1943 the title “Radio Unit” was adopted. The term “RADAR” was not adopted by Canadians until late 1943. 10 Radio Unit (RU) Cape Scott, one of the chosen sites, was formed on the 13 December 1942 and became operational 05 February 1943., Building and general construction were undertaken by Marwell Construction Company of Vancouver and #9 Construction Maintenance Unit (CMU). It was staffed by roughly seventy men located on two sites: the radar operations center and a camp site. The radar equipment was situated near the tip of the Cape and was connected by a plank and sand road to the four sleeping quarters (one for each crew), mess hall, sick bay, and other buildings located in the woods on the other side of the sandy neck. Shifts rode back and forth in the back of a dump truck.

Resupply of these remote RUs was difficult at the best of times but Cape Scott was particularly difficult as there was no wharf or float and no shelter at all from the heavy seas. Usually, the supply ship anchored off-shore at either the North or South Beach and lowered its dinghy, while rowboats from the detachment set out from shore; both small boats then went back and forth between the supply ship and the beach until the incoming cargo was all on shore. There were many occasions when boats were swamped and everything got wet or the sea was so rough that the supply vessel failed to make the station for several days which meant emergency rations were often used especially in the winter. There were also times when the Station had to rely on parachute drops of supplies from amphibian planes from RCAF Stn Coal Harbour which was their support base.

Whenever the supply boat visited, about once a week, everyone who was off duty swarmed down to the beach to help with the unloading: “organized sports” it was called. The mail came ashore first, the corporal clerk would take it to the orderly room and have the letters and parcels all sorted and ready for distribution by the time the ” sports” were over. Then came the sides of beef, sacks of potatoes, cartons of canned goods, pieces of technical equipment, hardware, housekeeping and medical supplies. And then there were the barrels of oil which were the life blood of the Station as it fueled the diesel electric generators which supplied all the electricity. The barrels were tossed over the side of the vessel and then shepherded to shore by dinghy and rowboat and, closer to the beach, by service guys in wet suits or swimming trunks, depending on the weather.

A 1500-pound safe was delivered by the ‘Combat’ and the saga of it being unloaded and brought ashore in the dinghy became a legend of the West Coast detachments. And no easier to bring ashore than the safe was a piano for the canteen, which it turned out, no one could play.

The original plan had been to supply the detachment with coal for heating and cooking, but getting it there was so difficult and with driftwood so abundant on the beaches, that burning wood seemed more sensible. This system worked well but frequent wood cutting details were required to keep the wood sheds full.

Transportation from the head of Holberg Inlet was possible by jeep on the old Government Road as far as Ronnings, but the final leg of the journey to the Cape was completed on foot, utilizing the same tortuous trail used by the early settlers some fifty years earlier. A landline communication link was established between Cape Scott and the parent station at Coal Harbour, and this was maintained by a #9CMU Corporal and fourteen men who regularly inspected and serviced the telephone lines.

For an isolated post with little clearing for any sort of playing field, they had an amazingly diverse recreational schedule. The men, after a lot of hard work, cleared a volleyball court and a regular schedule was drawn up, with frequent round robin playoffs with Coal Harbour and Port Hardy. The field was enlarged and a baseball league was set up with round robin tournaments with neighboring Stations. A mimeographed camp newspaper called “The Isolationist” was started and the fellows eagerly awaited the latest edition so that they might read the camp gossip and perhaps have a laugh at the cartoons and columns.

On the 14 September 1945 “closing orders” were received and on the 15th dismantling of the electronic equipment started and by the 19th of September the station was officially disbanded. The electronics were moved out of the operati 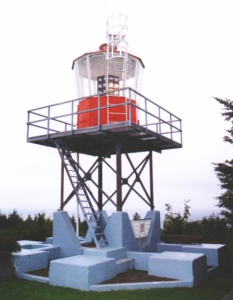 ons site but the buildings were left for the Canadian Coast Guard to use. The remainder of the camp site was left in place and some remnants of the original buildings are still visible today.

When the Coast Guard took over in 1959 the concrete foundation for the former radar tower was selected as the base for the new light house and the old operations building became the home to two diesel generators that powered the light and station. Three keeper’s dwellings were built near the lighthouse at the same time. In September 1981 the current tower replaced the old one on the radar foundation. 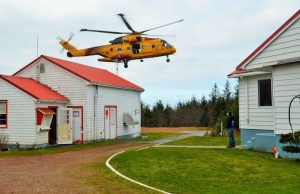 On a drizzly Saturday afternoon, 13 May, 101 Squadron, along with members from 19 Wing Comox and 888 Wing of the RCAF Association, arrived at the Cape Scott lighthouse aboard a 442 Squadron Cormorant helicopter. There they joined the lighthouse keepers to dedicate a memorial to RCAF Station Cape Scott’s role in the defense of Canada during WWII. Earlier a plaque was attached to the lighthouse foundation which once supported the radar tower.  It tells the station’s history and the post-war transition to a Canadian Coast Guard Lighthouse. 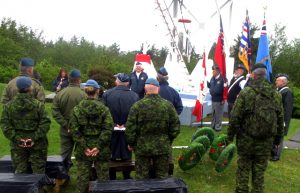 101 Squadron Vice President, Russ Hellberg, briefly explained the reason for the dedication service, and the why, when, and where of RCAF Cape Scott, including negative and positive aspects of service life there. Wing Commander, Colonel Mike Atkins, of 19 Wing, Comox,  noted how the station has been modified since it became a Canadian Coast Guard Lightstation, and pointed out that it is still a vitally important asset to maritime security and SAR activities.

Harvey Humchitt Jr, the principal keeper of the lightstation, who has served in that position, along with assistant Todd, for seventeen years, welcomed the delegation, saying that he appreciated learning what the station was like during WWII and what an honour the dedication was.

101’s bugler, Kristine Bratosh, played Last Post, followed by piper, Dale Drysdale, with the Lament, two minutes silence, and then Kristine finished the tribute with Reveille. Poppies, the symbol of remembrance and hope, were pinned to the Canadian flag which hid the plaque by each person in attendance, one-by-one. The plaque was then unveiled and the flag, with its poppies, was presented to Harvey in appreciation for his work and to be a lasting symbol of the dedication. 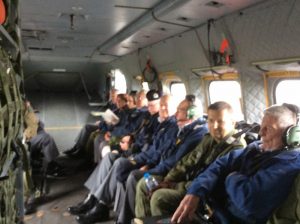 f life, were then laid, showing respect for the Canadian service members who have died or served this country. After the ceremony, Harvey showed the delegation around the station, after which they boarded the Cormorant and flew back through the rain and cloud to Port Hardy, then on back to Comox. 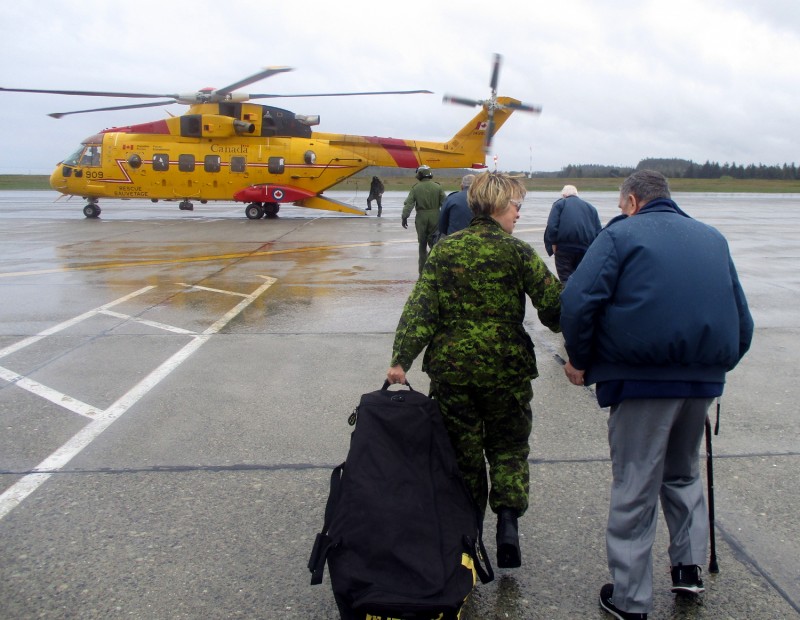 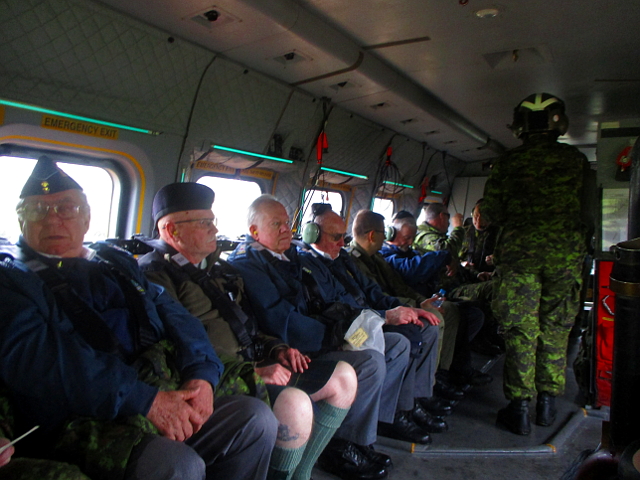 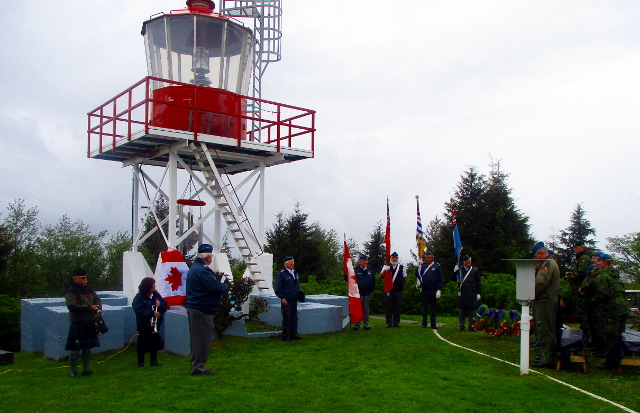 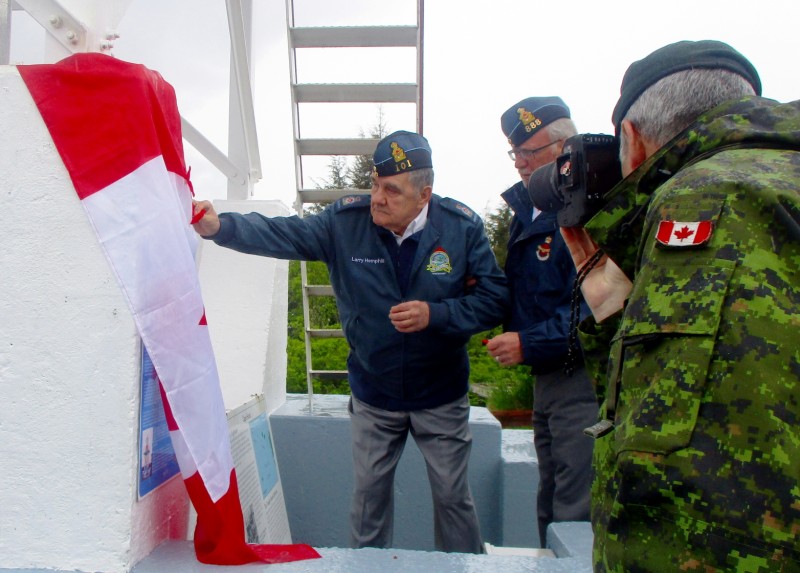 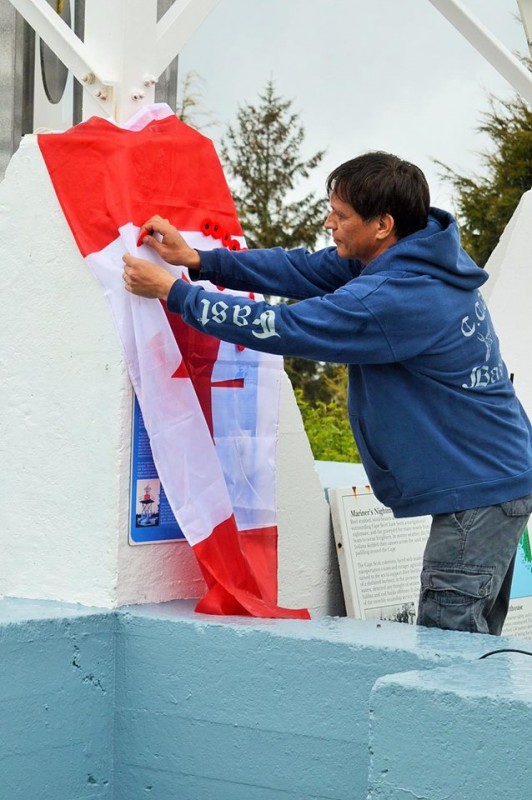 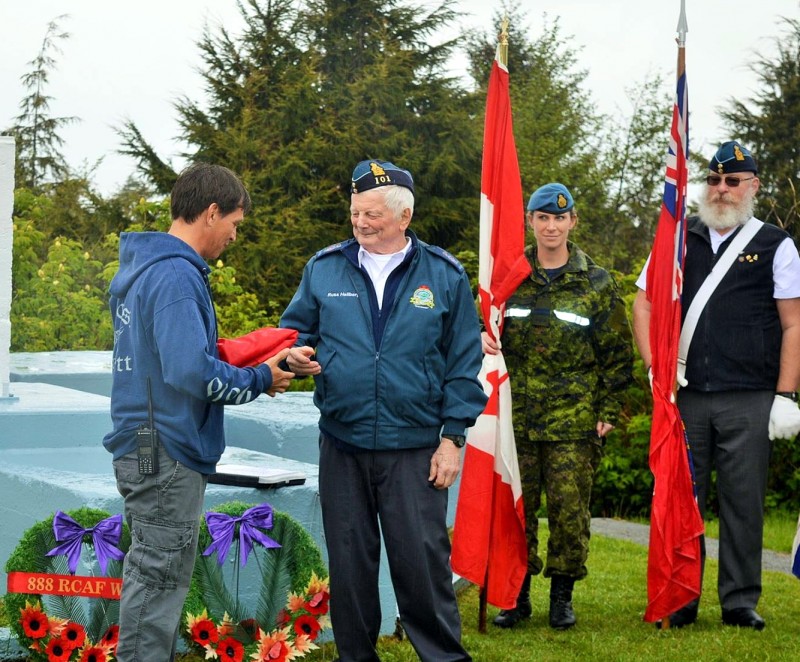 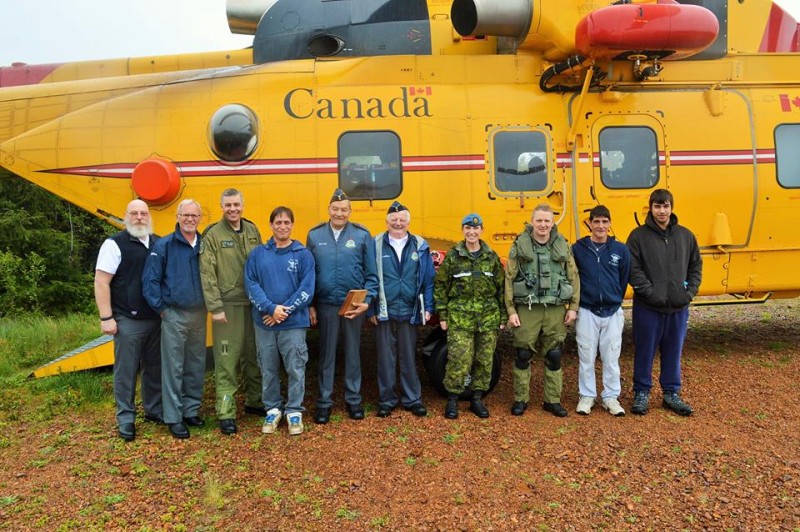 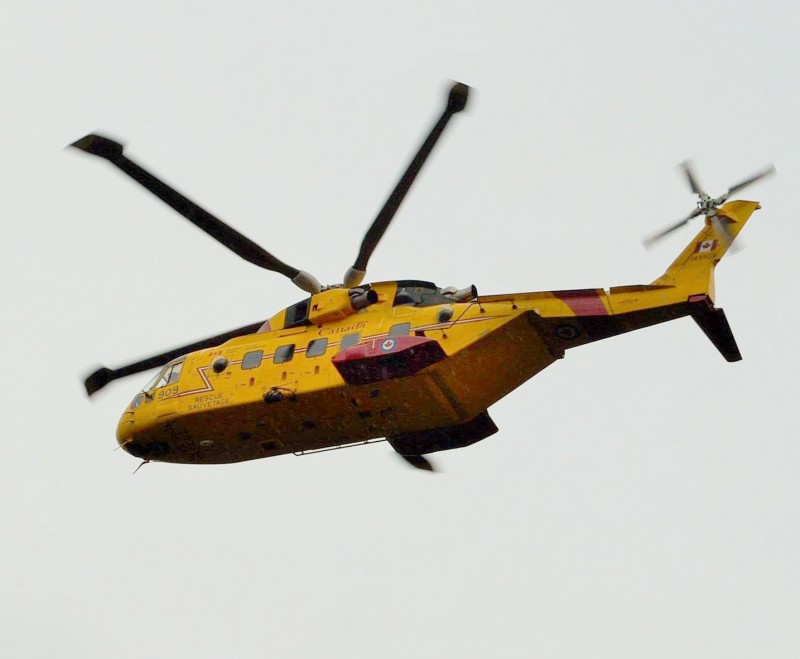